We will be ready! When the virus data signals to our Governor to move forward and allow indoor exercise facilities to re-open we are set. It is not considered safe quite yet, and it’s illegal to be open. We made a little video to show you how it will go when we are back in.

The building has been meticulously scrubbed. All the props have been washed or laundered. The carpets were cleaned. The air system has been serviced with clean new filters installed. We can run the system fans without AC for more air circulation. We are lucky to have so many big windows to open. New protocols will be in place when we are allowed to welcome you back. Our new protocols are based on the feedback received from the AASY student survey sent in May, as well as Workplace Guidelines for Fitness & Recreation Centers provided from the Michigan Department of Labor & Economic Opportunity. That document is below. We meet all the State’s safety recommendations.

We will have a limited maximum capacity of 14 students per class. The class schedule will be slightly changed to allow more time between classes so fewer folks will be in the building at one time and each day. We have carefully measured and marked the practice hall to ensure every student will be 7 feet or more apart from others. Spots are marked with blue tape. Thanks to Charlie Michaels for working out exactly where mat spots should be to maintain proper distancing.

We will be using new online registration software that will keep track of all class registrations and stop accepting in person registrations once 14 is reached. Also class lists will be generated and attendance taken so we will know exactly who was in every class if contact tracing becomes necessary. Everyone must be pre-registered to reserve a spot in any class. No one should come to the school without pre-registering. The classes will be available as live zoom classes and recorded so they can be available to view when convenient to you. If we are not allowed to open by Aug. we will proceed with some zoom classes. More on that soon. I hope you are are well, and finding some time for your practice. I look forward to seeing you in some dimension soon. – Laurie 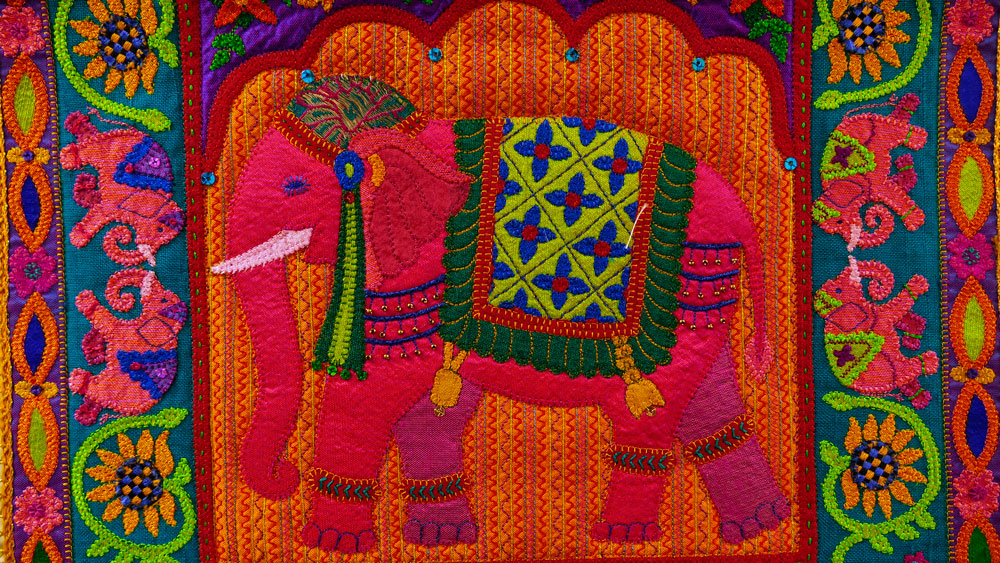 On Saturday, April 22, 2017 the Ann Arbor School of Yoga celebrated its 10th anniversary with a party. Each Spring Laurie celebrates the schools anniversary with food, art and entertainment. This year the food came from Jerusalem Garden, the cake from Zingerman’s, the art was Quilts by Pat Holly and the music was Indian Fusion played by John Churchville’s group, Sumkali.

The Asana hall was decorated with large quilts and Indian fabric. Laurie greeted everyone and led the Invocation to Patanjali. She then produced an easel and a marker asking the group for suggestions describing what yoga has meant to them. The responses were: Quiet, Community, All Encompassing, Discipline, Gratitude, Focus, Resource, Spiritual, Balance and Gear-Head. A woman drew applause using all the words in a sentence right away.

Laurie introduced this years exhibiting artist, Pat Holly, who spoke to us briefly about her works. 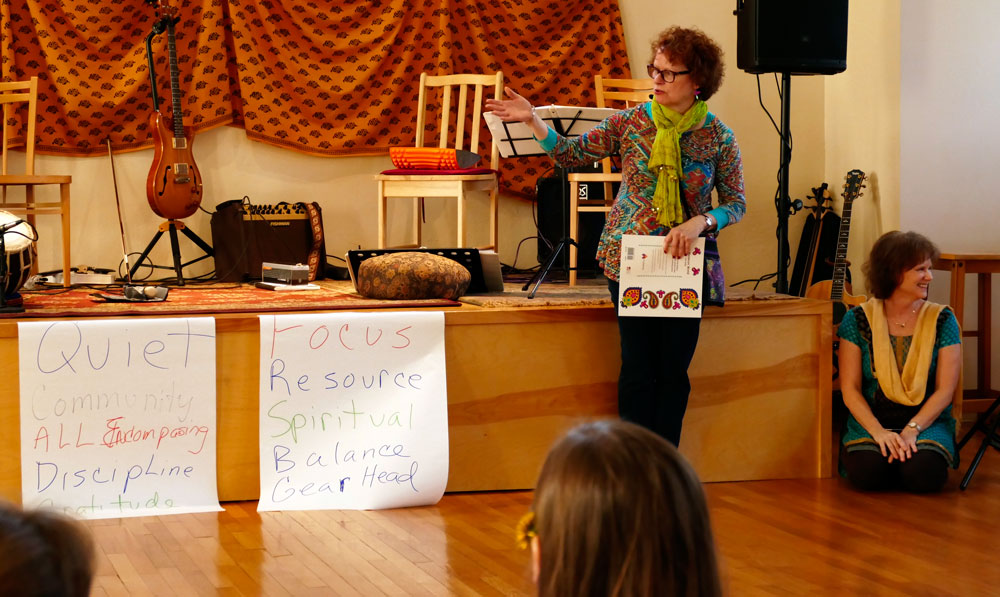 Then we headed down for dinner. The entry passage downstairs had more small quilts which were beautifully intricate and colorful.

Circular tablecloths spread on the floor with elegant place settings, flowers and an anniversary post card greeted the guests. The post card is lovely every year and some yogis have a card from all nine of the previous anniversaries! (Upstairs, in the outer room, there is a framed matted assembly of all these cards made by Alexa Lee!) 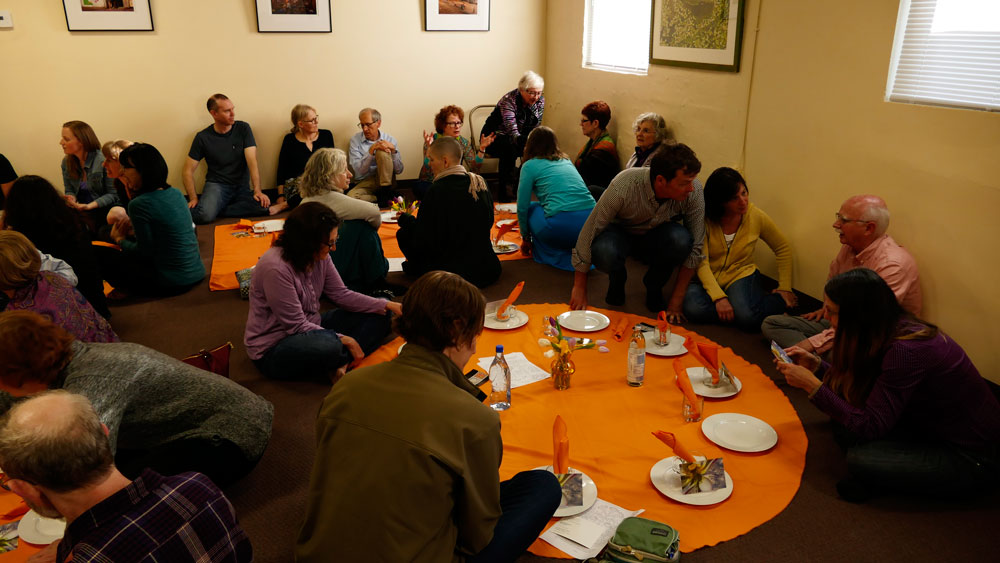 Diners enjoyed falafel sandwiches, hummus, pita bread and salad. A large cake for dessert was off to the side. Students, instructors, family and friends, and the musicians who’d play later, all ate together. The room rang with chatter and laughter. 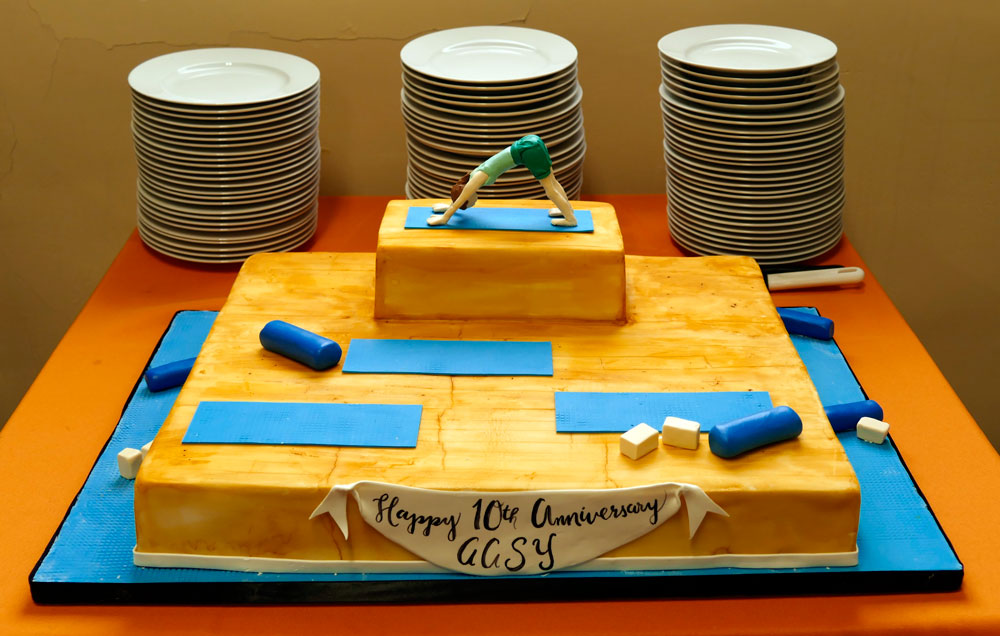 When it was time for dessert the cake from Zingerman’s garnered a LOT of attention. A trained panda would not have enjoyed a more attentive audience. The cake perfectly depicted the practice room upstairs, in detail, complete with wood floor, teaching platform, and a human figure executing Adho Mukha Svanasana (downward dog pose) on top! Yoga mats, blocks, and bolsters rendered in sugar were present and the teaching figure looked a lot like Laurie! It was almost a shame to cut into the cake. Almost.

While the guests finished dinner the musicians went upstairs to prepare for their performance and were playing their welcome music when the congregation headed back upstairs into the hall.

The 5 Piece Group, Sumkali, led by John Churchville, played Indian Fusion Music using the teachers platform as a stage. Large beautiful quilts hung to each side of the stage and fabric draped the wall behind the musicians. The lights were dimmed except for the stage. Perfect. The group performed as a 5 piece with Tabla, Violin, Guitar, Bass, and a Vocalist. They played one piece that used the Beatles “Come Together” as a theme in the middle. Fusion indeed.

The band played 9 songs that went by all too quickly. Party guests helped clear the great room as they do after every yoga class and the evening was complete.

The Ann Arbor School of Yoga community is interested in learning to live artfully, and also supports the arts!  We’ve enjoyed supporting different arts groups in our community.  Recently we had a stimulating evening of yoga and film.  Local online magazine  Ann Arbor Chronicle sent a reporter.  Read her account of our event at

Be in touch! Send emails to aasylaurie@gmail.com